Significance: Same as before, the Inquisitor makes the Inquisition wealthy.  The four represents people who are patient, practical and pragmatic.  I have to say, for myself, personally, my female elf Inquisitor had to be very patient with another specific elf.  I think we understand each other.

Reversed: Greed and loss of power, extravagance, waste due to a bad relationship with money, coming into a legacy, gains from a loss, lack of control or lack of resources, over-reliance on security, being materialistic, etc. 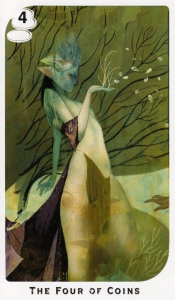 Holding up a silver branch, she watches the wind blows its white pure petals away, forward towards an unknown future.  The earthly and green colours representing the Elven people also indicates a connection to nature and life.  These petals, no matter how unknown the future is, will fall to fertile soil and reap new growth.  Dressed scantily, she allows her body to be with the nature around her, allowing herself to be vulnerable, hiding nothing from her allies.  She leans on a sturdy rock for support.  A head piece crowns her head, angled towards a shadow hand reaching from the future, trying to touch her, a warning or a guide; she will allow the spouting trees around her to judge, and she will trust.

What I think this means for DA: A lot about the Elven past and their gods has been exposed, pun intended, and I think they’re going to go with it, without resistance, and allow this to reveal truth, more truth, more trust, and therefore, more understanding.

Links to the Tarot Decks Used in the Comparison, the DAI Tarot Deck, and the Books used to determine what the cards actually represent: