Oh, there’s a lot of history with Rosie and the Tentacles now. It’s truly become a thing. I write “Rosie” because it’s become me, the player, and my tentacles. MY tentacles, my pets, I command them, or at least I used to. 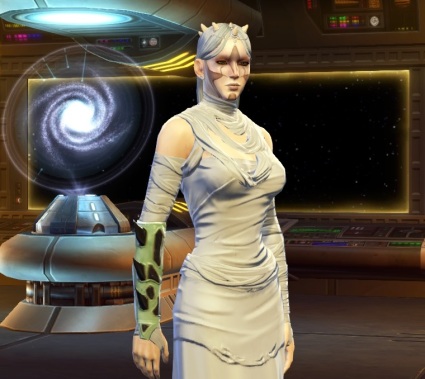 As an aside, in French, the term “sage” means “well-behaved”, and I suppose Rosiet looks innocent and well-behaved on the surface, at times. But in reality, behind that rosie Zabrak cuteness, she’s goofy and silly and has got herself into a tentatangle.

It all started while I was doing some group missions with my guild on the planet Oricon. I was playing on Rosiet. There are sections of that planet that spawn tentacles that pop out of the ground. I was walking around, following my guildies, walked exactly where they had walked, but all of a sudden, I’m being attacked by tentacles. Then later again, I get into trouble walking into some tentacles that respawned only when I was there. They couldn’t respawn when the others were walking on their spot, no, they had to wait for me to be right on top of where they spawn to respawn. It also happened a few times that I inadvertantly walking right into a tentacle. So this quickly became a thing. “Rosiet and the tentacles.” “Rosiet has a tentacle aggro magnet.” “The tentacles love Rosiet.” “Tentacles are attracted to Rosiet.” “Makes you wonder what Rosiet does for the tentacles to want to probe at her so much…” Et cetera.

But wait, there’s more. So ok, Rosiet had a thing with tentacles. But then I’m on Daenerys, healing my guildies, again on Oricon, we engage in a fight, so I’m pretty much standing in the same spot the whole time because I was safer there even though I can heal while moving for some abilities. So I’m standing there, right, in the same spot, not moving, okay. You’re already guessing it aren’t you? Well, it’s not hard to figure out. Daenerys gets attacked by tentacles that pop out of nowhere. It’s like, what the…

Over time, we discovered that ALL my characters tend to have this “thing” with tentacles and not just on Oricon.

Daenerys with Master Shadd on Oricon.

The Rosiet and the Tentacles jokes had already become a thing in the guild, especially that we speak to each other vocally using Mumble, so the jokes just kept coming and eventually, it became MY tentacles. And whenever something went wrong, it was the fault of the tentacles. “I blame Rosie and the tentacles.” “Rosie, what did you do.” “Rosie, get your tentacles out of here.” “Rosie, why did you send your tentacles after me.” So of course, I started to counter hehe “I’m gonna send the tentacles after you.” It was fun and funny. It was also a way to explain some of the inexplicable lag issues we’d sometimes experience. It was nice to know the source of the problem, even if we didn’t know how to fix the problem, we knew it was the tentacles. And see, blaming the tentacles was done for all sorts of silly reasons: Internet stopped working, video card crashed, someone’s boss was being a donkey, etc. All sorts of reasons, whether game related or not, the tentacles had always something to do with it. Our Imp side Guild Leader, Master Shadd in the above photo, her push to talk key sometimes sticks and we hear background static when that happens. Instead of telling her that her key is stuck, we began telling her that the tentacles got in her keys again. Or if someone lagged and fell off a cliff, it was the tentacles. The tentacles were behind everything. It was like some conspiracy of tentacles, they were taking over, they were trying to control everything.

So of course, I started to tame them. I wanted to take the most advantage over these creatures and use them to my benefit. I controlled the tentacles. I used them how I deemed fit and I sent them where I wanted. And when someone blamed Rosiet and the tentacles, instead of denying or defending my stance, this time, I HAD sent them and I just mwahaha-ed at them.

However, sadly, the tentacles got out of control. You see, tentacles, they get around lots of places and they started multiplying for some reason. I couldn’t control that many. So we figured a good solution would be to spread them out a bit, share the burden. So I gave some to a few guildies, but the tentacles ran rampant and no one could control them. I lost control over the tentacles! Eventually, I tried delegating them to one person, who would temporarily take control of them, and when he couldn’t handle them, he give them to another, and so on and so forth. Sadly, that didn’t work either.

Daenerys and some Guildies on Oricon.

The tentacles rebelled and they are back to being their own masters. I no longer control them 😦 And there are more now than there were before. So I apologize in advance if the tentacles get into your computer and house and start doing weird things to your stuff. Don’t be too alarmed if they pop out from behind your sofa or steal your TV remote control; they have a thing with sofas and remote controls. They also like to hang upside down from trees. And I don’t think they care about what weather it is either. Just be sure they don’t have any recording device while they are in a tree, you wouldn’t want them to take over your Facebook accounts on top of everything else. The last thing anyone wants is a viral video of themselves that was taken by some tentacle.

Between you and me, I think the tentacles have a hidden agenda. I think they want to rule over the galaxy. I don’t think we need to be too concerned about that right now, they are still doing everything mostly stealthily and behind the scenes. If ever we see the tentacles start running political campaigns, I think that’s when we can start to really worry. On the most part, they can be reasoned with, but there isn’t much more I can do at this point. They’ve stopped listening to me. If ever I find a way to regain control of them, you’ll be the first to know.